Work is set to begin this month on the rehabilitation of bushland at Montario Quarter, with removal of the existing infrastructure, followed by the re-seeding of native flora and planting of 400 new trees.

The majority of the new trees in the Woodland Precinct will be native species of jarrah, tuart and marri approved by the Department of Biodiversity, Conservation and Attractions.

Once established, the new trees are expected to double the size of the original canopy cover in the Woodland Precinct.

Following several years of weed management on the Shenton Park site, DevelopmentWA will remove a disused road and underground hospital storage units in Montario Quarter's Woodland Precinct ahead of the new plantings, which will commence in mid-2020.

The bushland rehabilitation, which will be a minimum two-year process, will also see seeds collected from the site prior to the commencement of works replanted in the Precinct.

DevelopmentWA chief executive Frank Marra said that the preservation and rehabilitation of bushland had played an important role in planning Montario Quarter.

"Our vision for Montario Quarter has sought to carefully balance the preservation of existing bushland alongside the need for bushfire protection, while ensuring we're able to deliver diverse new housing choices in an established and sought-after suburb," said Mr Marra.

"We have carefully considered our rehabilitation works to rejuvenate the areas of natural bushland on site – and in total we are planting more than 1,100 new trees across the estate, supported by unique underground Stratavault technology to help them grow larger and healthier.

"On completion, Montario Quarter will be home to almost three times as many trees as the site had prior to development."

Approximately 1,300 cubic metres of Stratavault cells were installed alongside and beneath roads within Montario Quarter last year to complement the extensive landscaping and green open spaces planned for the precinct.

The cells create root-friendly space under roads and paving, which normally compacts the soil around trees and prevents them from growing to their full potential. It also reduces the need for watering, with inbuilt irrigation channels directing all available storm and surface water to the trees.

The development was recognised in 2019 with a Green Building Council Australia 6-star Green Star Communities accreditation, the first urban village development in WA to achieve this rating. The rating acknowledges Montario Quarter as a world leader in sustainable development. 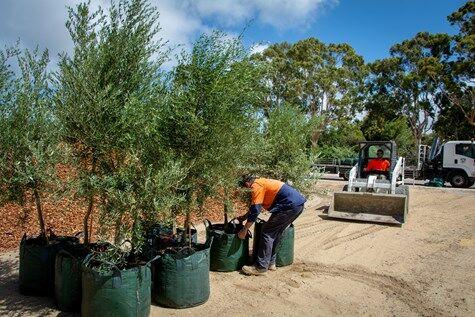 When complete, more than 25 per cent of Montario Quarter will be dedicated to public open space – well above the 10 per cent usually required for new residential estates.

Montario Quarter is being developed on the 15.8-hectare site of the former Shenton Park Rehabilitation Hospital. The landmark project is transforming the site into a modern and vibrant residential community, which will ultimately accommodate more than 1,100 new apartments and townhouses.

The estate has been master-planned as a green urban village, with tree-lined streets, preserved and improved areas of bushland and large community parklands.

Media Contact
Andrew Kikiros
9482 7448
This email address is being protected from spambots. You need JavaScript enabled to view it.