Seven new lots have been released at DevelopmentWA's Crossroads Industrial estate in response to strong demand, which has seen previous stages sold out.

The realignment of Anstey Road, together with the upgrade and realignment of Ranford and Keane Roads, has helped to deliver critical road and service infrastructure to support industrial development within the Estate.

Stage 4 lots at Crossroads Industrial are sized from 2,061square metres to 3,628sqm and are fully serviced with power, water, sewerage and broadband network access. They can be amalgamated to suit individual business needs and maximise flexibility for buyers.

The development of up 1.7hectares of new industrial land at Crossroads Industrial is expected to unlock $7.6 million in private investment and create 75 jobs during and after construction.

Situated in a prime location adjacent to Ranford Road with easy access to Tonkin Highway, the 41ha Crossroads Industrial estate is part of Forrestdale Business Park West and is the first metropolitan industrial estate delivered in the south-east corridor as part of the McGowan Governments economic and employment lands strategy.

"By releasing land in strategic locations, the McGowan Government is backing up its commitment to drive economic activity and social welfare, support small business and create jobs.

"Crossroads Industrial is strategically located in Perth's south-eastern corridor and is rapidly expanding into one of our city's key industrial estates.

"Access to good quality, well-located industrial land is the key to growing business and creating jobs in Western Australia, and the release of new land in Crossroads Industrial ensures businesses seeking to locate or expand in that sought-after south-east corridor are able to plan with confidence.

"The McGowan Government's $27 million commitment to supporting critical infrastructure development is also vital to unlocking land for industrial use, and WA businesses are seeing the benefits of that investment."

"The Crossroads Industrial development is driving economic activity in the Jandakot electorate by providing opportunities for businesses to expand and generate more jobs.

"Given the strong demand we have seen, I have no doubt we will be seeing many more businesses expanding their operations into Forrestdale.

"The significant roadworks our Government is undertaking will also support the further development and expansion of Crossroads, which is quickly becoming one of the prime industrial estates in the south of the city." 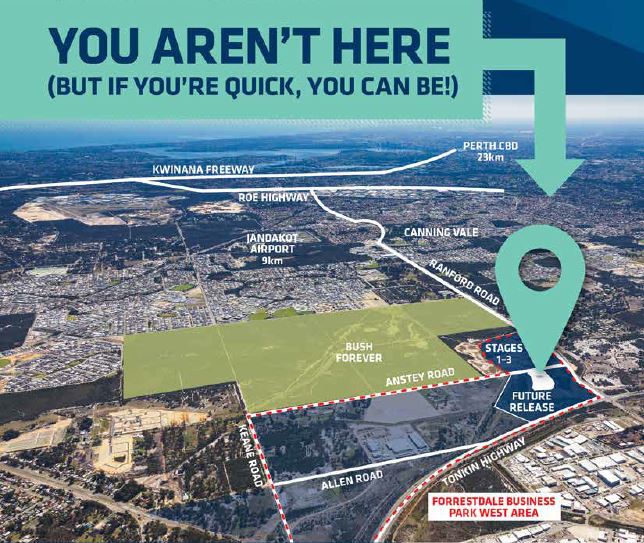