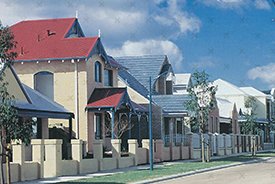 Our long-standing commitment to Innovation through Demonstration is demonstrated in Plaistow Street Joondalup, a $2 million, award winning project that began in September 1995.

Located within the fully integrated commercial, mixed-use and residential community of Joondalup City North, this residential demonstration street was opened by the then Minister for Lands as a joint project between selected home builders and LandCorp.

This Innovation through Demonstration development received peer recognition, winning the Western Australian Division of the Urban Development Institute of Australia 1997 Award for Excellence in the major urban project category.

Further commendations were received for the innovative housing products used in the development which are now in use in other subdivisions in the Perth metropolitan area.