Newman is located approximately 1,186 kilometres north-east of Perth on the edge of the Hamersley Ranges. The town was established in 1968 by the Mt. Newman Mining Company as an accommodation centre for employees at its nearby iron ore mine. Newman grew rapidly in over the next 20 years and, in 1981, management of the town was sold to the Shire of East Pilbara for $1.00. As a part of this normalisation process, houses owned by the mining company (now BHP) have gradually been sold to residents, with 30% of the current housing stock now owned by private and government sectors.

The East Pilbara is one of the most extreme and isolated regions of Australia. The Great Northern Highway is the main access to Perth and other towns in the region. In summer, temperatures regularly exceed 35°C with hot winds coming off the Great Sandy Desert. Rainfall is erratic, low for much of the year, yet heavy enough to cause flooding during cyclone season.

The town has a number of natural and built constraints because of its location. However, the council and the community have tried to actively address these issues. Since the process of normalisation began, Newman has engaged in a number of progressive community and development planning initiatives. Today, Newman is considered to be one of the most strategically prepared towns for the predicted population growth of the Pilbara region.

By 2035, the town's population is expected to nearly triple, solidifying the town's role as a primary service centre in the East Pilbara. 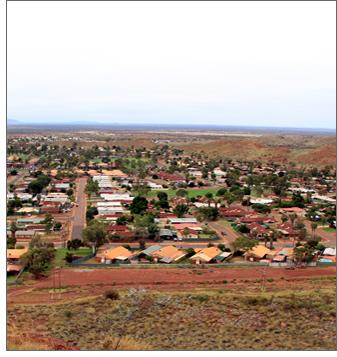